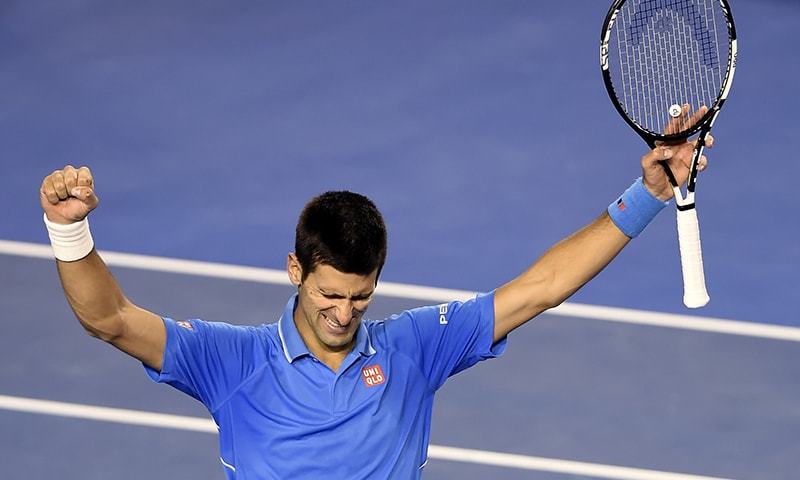 In this photo, Novak Djokovic of Serbia celebrates after defeating Andy Murray of Britain in the men’s singles final at the Australian Open tennis championship in Melbourne. — AP/File

ROME: (AFP) Serbia’s Novak Djokovic moved a step closer to defending his Italian Open title after seven-time champion Rafael Nadal was stunned in the last eight by Stan Wawrinka of Switzerland on Friday.

Djokovic, who beat Nadal in last year’s final to claim his third title in the Italian capital, dominated Japan’s Kei Nishikori in a one-sided quarter-final to set up a semi-final meeting with David Ferrer.

In their 19 meetings so far, Djokovic has won 14 times. Although Ferrer has won three of their five meetings on clay, his last victory against the Serbian on the surface was during a Davis Cup match in 2009.

Djokovic has won their past two meetings on clay, including a three-set quarter-final in Rome last year.

But, admitting he has yet to reach the form that saw him beat Tomas Berdych in the final of the Monte Carlo Masters last month, Djokovic warned an upset could be on the cards.

“I have to be honest and say I haven’t been playing as well in this tournament as I did at Monte Carlo. The level I want to get on is still not there,” said Djokovic.

“Hopefully I will be able to play better — more consistent, less unforced errors, less ups and downs in tomorrow’s match — because I have another clay court specialist, one of the best competitors on the Tour, somebody that is not going to hand me the win.

Djokovic, however, will have taken inspiration from Nadal’s defeat in front of a packed central court crowd that included Hollywood star and producer Ben Stiller.

Wawrinka had beaten Nadal only once in their previous 13 encounters, notably defeating the 14-time Grand Slam winner in the final of the 2014 Australian Open on a synthetic surface.

But the 30-year-old from Lausanne wowed the crowd on his way to a 7-6 (9/7), 6-2 win over the Spaniard that secured a semi-final match-up with compatriot Roger Federer on Saturday.
Swiss showdown

Nadal, beaten in the final of the Madrid Masters clay last week by Britain’s Andy Murray, remains the favourite for the French Open at Roland Garros, the highlight of the clay court season which begins in less than 10 days’ time in Paris.

But the Spaniard’s defeat will have alerted his rivals to growing chinks in his clay court armour.

Nadal ultimately took his hat off to his Swiss opponent. “He hit amazing shots in a lot of key moments… he played a lot of good points. I accept [the result], I can only congratulate him.

“I’ve lost in the quarter-finals but I’ve had two weeks in a row playing well – only once have I lost, in the final of Madrid, to Andy Murray.

Wawrinka was composed after the game, but admitted: “For me it’s really important to beat Nadal on clay, I’m really happy.”

In a semi-final that will have most of Switzerland glued to their television sets on Sunday, Wawrinka will try to beat Federer for only the third time in 18 meetings.

“It’s never easy for me to play [Federer] he’s been playing faster this week and serving well,” added Wawrinka.

“It’s going to be tough for sure and I’ll have to be at my best if I’m to beat him.”

Russia’s Maria Sharapova, the last winner of the women’s title in the past five years still in contention in Rome, boosted her chances of a third title but first since 2012 by cruising to a 6-3, 6-2 win over Victoria Azarenka of Belarus.

In the other semi-final Spanish 10th seed Carla Suarez, who stunned the fourth seed Petra Kvitova 6-3. 6-2, will meet the second seed Simona Halep after she swept past fellow Romanian Alexandra Dulgheru, a qualifier, 6-1, 6-0.

Defending champion Serena Williams pulled out of the competition on Thursday citing a sore right elbow.