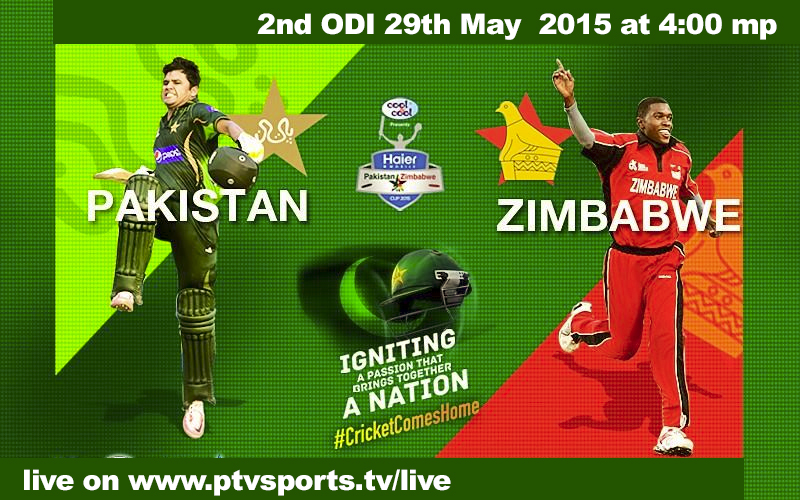 In the quest to seal the first One-Day International (ODI) series on their home-soil after over six years, Pakistan will take on Zimbabwe in the second ODI of the three-match series at Lahore. The first match was also played at Lahore, where Pakistan won by 41 runs in a high-scoring encounter.

Spurred on by renewed energy of playing in front of their home crowds, Pakistan have undoubtedly been the dominant side throughout the series so far. They won the two-match T20I series 2-0 before triumphing in the first ODI. READ: Pakistan may have to maintain war-footing for future tournaments

Zimbabwe, however, have been far from pushovers. In fact, they ran Pakistan excruciatingly close in both the T20Is and gave their hearts out in the chase of a mammoth 375 in the first ODI. Even they have felt the warmth of the Pakistani crowd, who did all to display their gratitude to Zimbabwe for finally bringing international cricket back to the nation. READ: International cricket resumes in Pakistan: A plea to fans

Pakistan have been excellent in both bowling and batting. They have played quite sensibly throughout and have reaped the rewards. Zimbabwe’s batting side has been phenomenal too but it’s the lack of a genuine fast bowler in their bowling department that has hurt them most.

Tinashe Panyangara and Brian Vitori have used the new ball very well but their expertise seemed to vanish when the shine on the ball disappeared. They both ended up with quite unimpressive figures in the previous ODI with Panyangara conceding 75 runs with just a wicket to show and Vitori conceding 77 for no wicket.

Prosper Utseya was relatively far better in the spin department picking two wickets and conceding 62 runs in his quota of 10 overs. However, his work was undone by some ordinary bowling by part-timers Sean Williams and Sikandar Raza both of whom bowled five overs each without picking a scalp and bleeding runs at 8.40 and 8.60 RPO respectively.

Pakistan’s batting was great overall but Shoaib Malik stoodout with a 76-ball 112. He received abundant support from Mohammad Hafeez, Azhar Ali and Haris Sohail. The Pakistanis made most of the mediocre Zimbabwe attack to score 375 runs. Zimbabwe’s response to the huge score was full of courage however.

Captain Elton Chigumbura led the way with a ferocious 95-ball 117. But now the visitors have to manage without the services of their regular captain, as he was suspended for two games by International Cricket Council (ICC) due to poor over rate by his bowlers in the last game.

Apart from Chigumbura, Hamilton Masakadza was the next best performer for Zimbabwe scoring a run-a-ball 73 and even though these knocks were supported by handy contributions from other batsmen it wasn’t enough in the end. Zimbabwe finished their chase at 334 for five in fifty overs, 41 runs short.

In the second ODI, Pakistan will look to perform better with the ball, but will enter the match comfortably crowned favourites. Zimbabwe will have to deliver an exceptional performance with the ball if they are to threaten the home team.