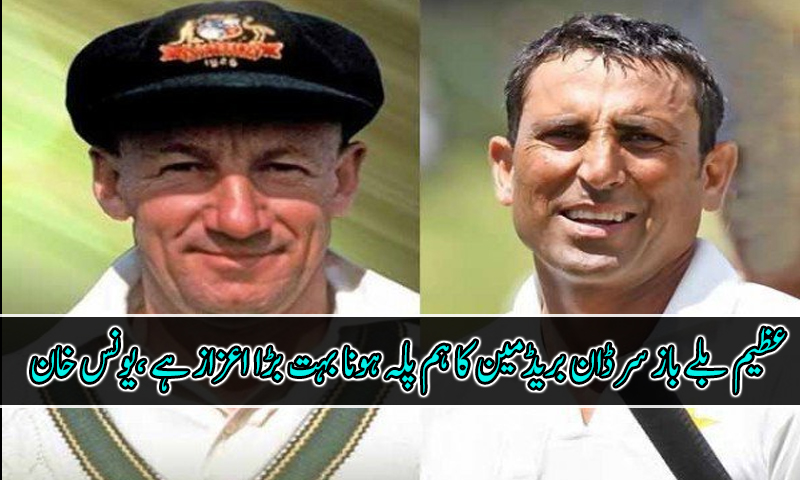 (AFP) In the Khulna Test, Younis Khan had to wait for 71.5 overs for his turn to bat, but in Dhaka he had to come out in the 23rd over after Pakistan lost both openers for 58. However, Younis’ 148 that came in a little over three hours drove Pakistan into a position of advantage by the end of the first day. It was Younis’ 29th hundred, the same as Don Bradman.

“It’s always good to stand equal with the likes of Bradman,” Younis said. “I am happy that I am still going on and scoring hundreds. If I was able go back and start my career again I would want to score hundreds at the average of Bradman and it could have been more satisfying for me.”

Along with Azhar Ali, Younis put up a partnership of 250 runs for the third wicket. Both had looked uncomfortable early on and played out the first hour watchfully before finding fluency. Younis strike rate was brisk as he completed his half-century in 72 balls, and reached the hundred-mark in 142 balls. Frequently using the sweep, Younis scored 100 of his runs on the leg side.

“I always insisted on building partnership and players like Azhar are the future of Pakistan cricket,” Younis said. “We chat a lot in the middle, rotate strike and allow each other to establish and with bigger partnership, the chances of win increase.”

Younis said that the Bangladesh decision to field was a good call as the pitch had some early help for the bowlers, but then it flattened out to aid strokemakers.

“Pitch was supporting both the bowlers and the batsmen and if you play properly you have a chance to score big,” Younis said. “The outfield was slow and if you bowl with pace and in good areas, there was some help definitely. We saw it worked well for them in the first hour.

“The decision to field wasn’t bad. With grass on the pitch, captains want to make use of the moisture and it went well for them. The way they bowled the first few overs, they got Hafeez, who was in a very good nick, but when a partnership started to build for us they lost their way.

“But Bangladesh bounced back strongly in the previous Test and it won’t be easy for us going forward. The first session (tomorrow) is crucial again and we got to have enough runs to put them under pressure.”

Younis did provide a chance to Bangladesh. On 78, he was caught at short cover off Soumya Sarkar, but the replays showed the bowler had overstepped. After that lucky break, he went on to complete his fifth century in seven Tests.

He was on 78 when he scoped it straight at short-cover to be caught but on reviewing the foot no ball by the third umpire, he got a luck lifeline. He was ‘lucky’ to have a chance to covert the inning into yet another hundred as this is his fifth hundred in last seven Test matches.

A Younis century usually bodes well for Pakistan: Fourteen of his hundreds have comes in Pakistan wins.

“It’s always good to have a chance,” Younis said with a smile. “I was in mood to score big and when you are at 70-odd runs it great to have a chance like that to convert the score into a century. It worked for me and I grabbed it.”